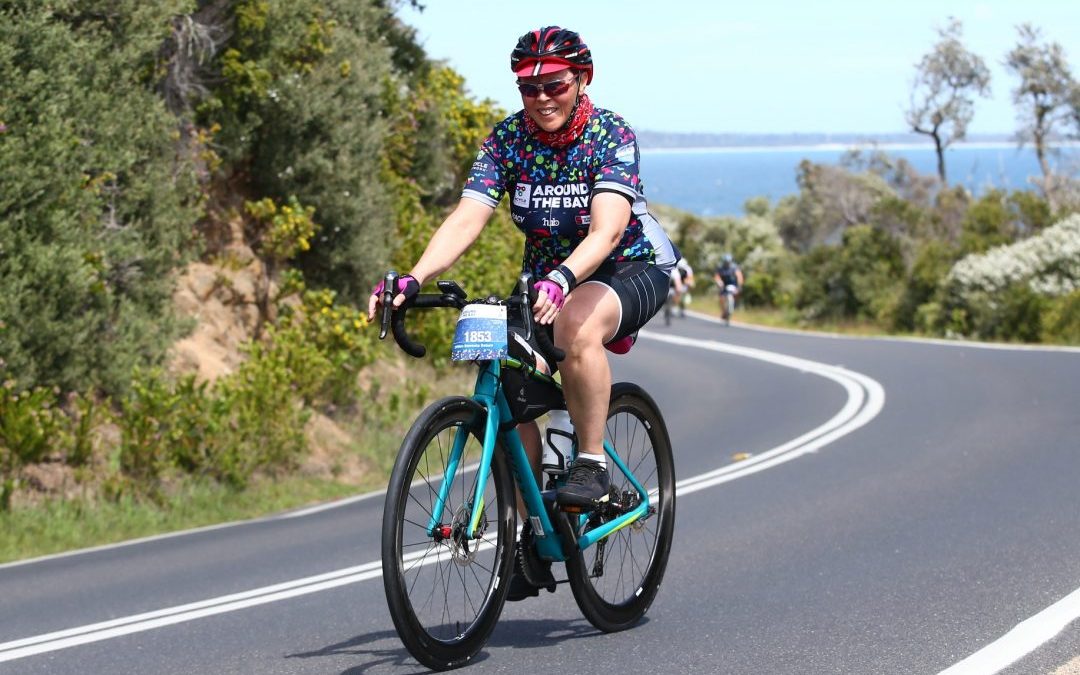 Thank you for coming this morning to remember Teresa and Kathy.

My name is Michael. I am Teresa’s husband. Her two daughters Tine and Mone are also here, as are some of Teresa’s friends and work colleagues. Her son is Rainer unable to be here.

Teresa was born and grew to an adult near Durban in South Africa. She trained as a doctor at the University of Witwatersrand in Johannesburg. In 1995 she moved to New Zealand with her young family. The family moved from New Zealand to Canberra in 2000.

Teresa took up bicycle riding in 2007. She did weekend rides with Pedal Power groups, and also rode as the pilot on a tandem with blind riders.

From the beginning of our time together as a couple we started riding. The first few months as a cycling companion were a bit of a struggle for me. In order to complete an around the lake ride, it was necessary – for my sake – to drive to Canberra Yacht Club first before setting out. And I needed a rest stop and food at the Government House lookout to make sure I made the distance. Teresa was very patient. Over time I must have improved as the distances we set for ourselves increased and we could start from our home in Wanniassa. But despite my improved capacity, Teresa was usually out in front at the end of most rides.

As best as I can remember Teresa and I rode our first Fitz’s Challenge– the 106km distance- in 2012. Since then Fitz’s became an annual cycling focus: when to start regular riding again to avoid the winter cold, but soon enough to be ready to undertake the 106km distance in late October.

Teresa (and I) rode the 106km Fitz’s Challenge about 6 times, Amy’s Big Bicycle ride (once) and the Five Peaks Challenge (once). She also rode several times in the Tour de Femme.

Most weekends during spring, summer and autumn we would be riding: north to Sutton or Gundaroo, south to Guise’s Creek and home via Queanbeyan, or to Tharwa and Tidbinbilla, north and west to Stromlo and Uriarra. And leading up to Fitz’s all the way through Cotter to Tharwa and then home.

For good measure, she (with me following) also ran/jogged in two half marathons and several other community runs.

About 4 years ago, Strava ran a “how far can you ride in a month” competition. Although Teresa did not initial set out to compete, one week from the end of the month she noticed that she was well placed on the Australian leader board. So on the last week end, we set out to ride to Gundaroo and back. Just to be sure of a good total distance, she thought we should ride a few km north of Gundaroo before turning around. By the time we were close to home, I was pretty tired and more than ready to stop. But Teresa had decided that she needed an extra 10km to make sure of a good monthly total. So we did an extra leg down to Lake Tuggeranong.

This is a snapshot of Teresa: full of energy and motivation.

Teresa had been thinking about doing the 165km Fitz’s ride this year. In the week before her accident she rode from Wanniassa to Rendezvous Creek and back – which includes Fitz’s Hill – to become familiar with that part of the 165 km route.

Of course there was much more to Teresa’s life than weekend cycling.

Since settling in the ACT in 2000, she worked as a psychiatrist in the public system in Canberra; and at different times in Queanbeyan, Cooma, Bega, and Goulburn. Since her accident and death I have been contacted by several people who wished to express their gratitude for the help that Teresa was able to give to them – or a member of their family – that changed their lives.

As a mother she gave of herself over many years – in sometimes difficult circumstances – to raise her three children to adults – and then – as best she was able – to guide them.

And for 10 years she shared her life with me.

While we are here to remember the lives of Teresa and Kathy, before I finish I want to speak my truth to you.

Teresa was the centre of my life, a steady presence in the lives of her children; a valued colleague, and a source of continuity for those for whom she cared.

Her accident and death was unexpected, and sudden. One ordinary Saturday morning she and I set out for a ride to Tidbinbilla. A few hours later she was in ICU. Two weeks later she died without regaining consciousness.

In our own ways we each struggle to cope with the gap that is now there.

In the busy-ness and routine of our lives, I hope she knew our love, our respect, and our gratitude.

Please value those who are close to you. Each day. Every day. They are precious.

Please remember that when riding our bikes we are very fragile. And that cyclists and motor vehicles are a dangerous mixture. Both as riders, and as car drivers we need to be always aware of the enormous human cost that can flow from carelessness, from a mis-judgement or mistake.

Growing up in the inner Sydney suburb of Surrey Hills, my wife Kathy Ho never had a childhood where you could learn to ride a bicycle. In the narrow, car-jammed streets beneath the giant cupcake shadow of Centrepoint Tower, there was no safe place to learn. Consequently, bikes were always for other people: Kathy’s entire travelling life was spent on four wheels and in air-conditioning.

So I was dumbfounded when five years ago, at the age of fifty, Kath came home to our place in Lyneham, to tell me she was planning to cycle 612 kilometres from Mount Gambier in South Australia to Geelong in Victoria a mere four months hence.

The ride was the Great Victorian Bike Ride, which in that year, saw an iconic route along Victoria’s Great Ocean Road. A woman at work of similar age had assured Kath she could do it, so with fourteen weeks in hand, she was determined to try.

With work quiet, she took four months off to train. I was recruited as coach, companion, mobile mechanic, domestiqueand occasionally, medic.

Over ensuing weeks, Kath’s first 100 m of wobbly riding became three km, then ten, 20, and 30. As the cherry buds began to peek through Canberra’s frost-rimed branches, Kath and I would spend our mornings belting out 50 km on Canberra’s bike-paths from Lyneham to Tuggeranong, coming home to gobble noodles, then push our shaking legs out for another 30 km around Belconnen and Gungahlin.

Kathy’s self-managed training was dedicated, single-minded and almost worked. Of the 612km of her first major ride, she rode all but seven – only being defeated by an especially hard mountain leg, one chill, drizzling, three degree Victorian afternoon, after three solid days of riding more than 80km per day, and having to catch the bus into camp.

Over five successive years, Kathy rode almost 30,000 km, participating in Round the Bay, Tour de Rutherglen, more Great Victorian Bike Rides, the Audax Alpine Classic, and the Big Canberra Bike Ride. Whenever a ride bested her, it became Unfinished Business to be tackled the following year; and whenever she completed an especially hard ride, she’d look around to find where an evenharder challenge was – and then, science-trained, she’d seek to learn the sport science needed to conquer it. In the last year she rode with a power meter, and could talk training, power, gradients, gearing, hydration and nutrition so competently, fellow cyclists were beginning to consult her for advice.

But Kathy’s cycling career came to a tragic end on June 3rd this year, when we were training outside Bungendore: on a cold, clear winter’s day, both dressed in bright orange, in full sunshine, on a straight and well-maintained road, on a quiet Sunday, we’d planned a gentle, nearly flat 80 km ride past Tarago between more intensive training.

I was a kilometre ahead of Kath when a passing driver alerted me to the accident behind. I returned to find my wife of thirty-five years sprawled on the road-side, a white Mercedes van stopped a long way past her with its hazard lights on, and two Registered Nurses in attendance: miraculously passing in the other direction, they’d stopped immediately to provide aid.

The help provided by passing drivers and first responders was extraordinary and exemplary. Police closed the road to allow a Snowy Hydro Southcare helicopter to land, with a view to airlifting Kathy to Sydney. However, Kathy succumbed to her injuries before she could be moved. To his credit, the driver remained at the scene. Police charged him with two criminal driving offences that afternoon, and the matter is now before the NSW court.

The role of community was central to Kath’s love of cycling, and key to kindling in her a joy in the sport, in the outdoors, in helping her to learn and to achieve all that she did. Had not Canberra been blessed with such an abundance of safe and high-quality cycling paths in such a bike-friendly community, Kathy might never have discovered her passion, nor realised her dreams.

I wish to acknowledge the staff and volunteers of Pedal Power, the Bicycle Network, the Audax Australia Cycling Club, Rotary Australia and the ACT Government for their many valuable contributions to Australian and Canberran community cycling, and to the Amy Gillett Foundation for its critical contributions to shared road safety. I want to thank you, our Canberran cycling community and friends, for your attendance today – Kathy would be touched and honoured beyond measure to see us assembled here.

The lessons from Kathy’s and so many other tragedies are well known to cyclists, but still being grasped by our broader community: cyclists are vulnerable, and every vehicle you share the road with is far more powerful and better armoured than you. Such sharing can only occur in mutual respect and trust, and that begins with better awareness.

No driver, I believe, wants to be party to such an appalling tragedy.