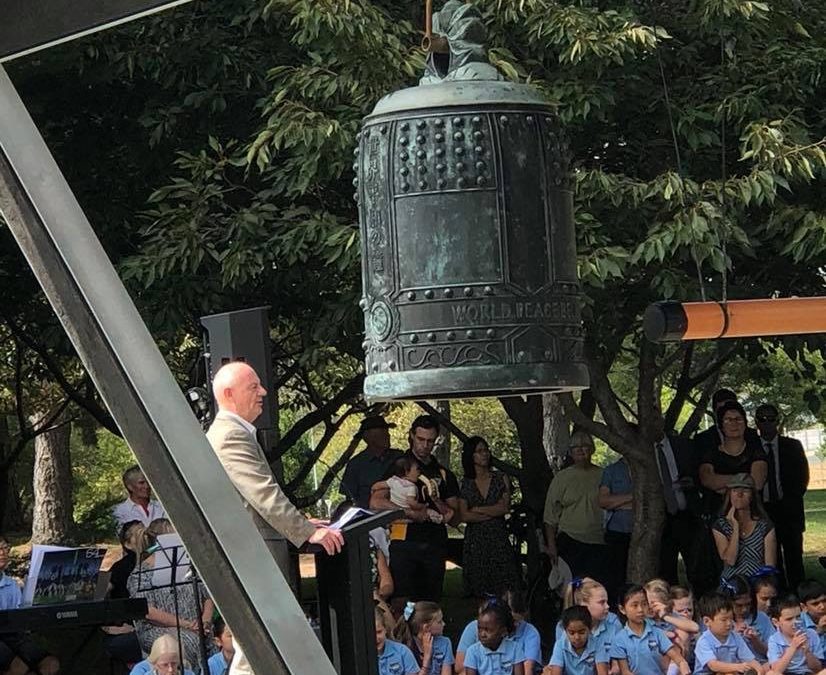 • I am honoured to be here today – on World Rotary Day – to launch the magnificent Peace Bell – the 23rd peace bell to be erected worldwide and the second in Australia.
• Made from the melted coins of United Nations member countries, the Peace Bell is a powerful symbol of our hopes for a peaceful and more just world.
• We desperately need peace. More people are being displaced by war and persecution than ever before.
• Devastating conflicts rage in Iraq, Syria and South Sudan. The Afghan War has entered its 17th year with a record number of civilians deaths, while in Yemen, a Western-backed, Saudi-led coalition continues to bomb civilian targets using western-made weapons
• The question that occurs is this: Can we have peace in our time?

Peace in our time?
• “Peace for our time” was a declaration made by British Prime Minister Neville Chamberlain 80 years ago, just before the outbreak of World War 11. Chamberlain’s statement is primarily remembered for its ironic value.
• U.S. President John F. Kennedy alluded to Chamberlain’s statement in a 1963 speech in which he sought “not merely peace in our time, but peace in all time.”
• Another U.S. President Barack Obama also used the phrase “peace in our time” in his 2013 inaugural address.
• We seek peace…and yet it seems elusive.
• On the first day as head of the United Nations — January 1, 2017 — Antonio Guterres pledged to make 2017 a year of peace.
• The year didn’t turn out as he expected. In an informal address to member states at the U.N. General Assembly a few weeks ago, Guterres said “peace remains elusive” — and “in fundamental ways, the world has gone in reverse.”

We must be effective
• It’s easy to be discouraged when we read the headlines about global conflict.
• Martin Luther King said those who love peace must learn to organize as effectively as those who love war.
• He said we will not build a peaceful world by following a negative path. It is not enough to say we must not wage war. We must concentrate not merely on the negative expulsion of war but on the positive affirmation of peace.
• We must see that peace represents a sweeter music, a cosmic melody, that is far superior to the discords of war. In short, we must shift the arms race into a peace race.

Is any war justified?
• The early Christians did not believe in war. Tertullian, a third century Christian scholar, echoed the common view: “When Christ disarmed Peter in the garden (after he cut off the ear of a Roman soldier sent to arrest Jesus), He disarmed all Christians.”
• But in the fourth century, Augustine of Hippo developed what became known as the the “Just War” theory. It supposed that war was OK under strict guidelines — that it be a last resort, that the cause is just, that the war is waged with the right intention (not to exact vengeance or confiscate territory); that war is declared by the proper authority and with a reasonable hope of success.
• The problem with the concept of just war is always the adjective.
• There will not be any lasting peace for this world resulting from military force.
• Nearly all wars are due to the desperate grasping of an ideology, a fight for resources or for power

A solution?
• Prominent US law professor Roger Fisher came up with a simple, but possibly effective way to lessen the chances of war.
• He said: Put the codes needed to fire nuclear weapons in a little capsule, then implant that capsule next to the heart of a White House volunteer. The volunteer would carry with him a large butcher’s knife as he accompanied the President.
• If ever a President wanted to fire the nukes, the only way for him to do it would be to first, with his own hands, kill one human being. There must first be blood on the White House carpet.
• Roger Fisher said: “When I suggested this to friends in the Pentagon, they said: `My God, that’s terrible. Having to kill someone would distort the President’s judgment. He might never push the button’. ”

The Christian view
• When the apostle Paul wrote that in Christ there is neither male nor female, free man nor slave, Jew nor Greek -he was expressing a truly revolutionary sentiment.
• To be a Christian in those times was to think and live counter-culturally, and in the process of course to risk persecution and death.
• From the very beginning of the Christian faith in the first century there is evidence that Christians were motivated in their social justice and poverty programs by revolutionary ideas -ideas very different from the prevailing Greco-Roman worldview:
• One was a different vision of the human being. Christians inherited the Jewish idea that human beings are made in the image of God. Consequently, all human beings are deserving of dignity and respect because they are special to God and reflect something of his character.
• There was a different view of the material world. God’s concern for and endorsement of the goodness and integrity of creation -the created environment. This is a vision of shalom, that is to say, of harmony, of the world run right of human community as it is meant to be, in which humans enjoy right relationship with God, each other and the world.

Violence is ineffective
• In the book, What Every Person Should Know About War, Christopher Hedges writes that over the past 3400 years, humans have been entirely at peace for 268 of them, or only 8 per cent of recorded history.
• But at least one study finds that non-violent resistance is actually about twice as effective as violence.
• Maria Stephan and Erica Chenoweth analysed 323 resistance campaigns from 1900 to 2006 and found that major nonviolent campaigns had achieved success 53 percent of the time, compared with 26 percent for violent resistance campaigns.
• The study sheds light on why terrorism has been largely unsuccessful.
• Jody Williams who won a Nobel Peace Prize for her work to eradicate landmines, said peace was not about personal security but sustainable peace, justice and equality for all.
• It is a sustainable peace in which people on this planet have access to enough resources to live dignified lives, where these people have enough access to education and health care, so that they can live in freedom from want and freedom from fear.
• Sustainable peace is not about our nation becoming a major arms trader.
• It is using that money more rationally to make the countries of the world secure, to make the people of the world secure.
• Dozens of countries are today at war with themselves or each other. Every bullet fired in rage is a setback in the larger war against poverty. Without peace, we cannot have sustainable development or justice.
• It’s up to all of us. As Desmond Tutu said: Do your little bit of good where you are; it’s those little bits of good put together that overwhelm the world.
• For whom does the peace bell toll? It tolls for all of us.