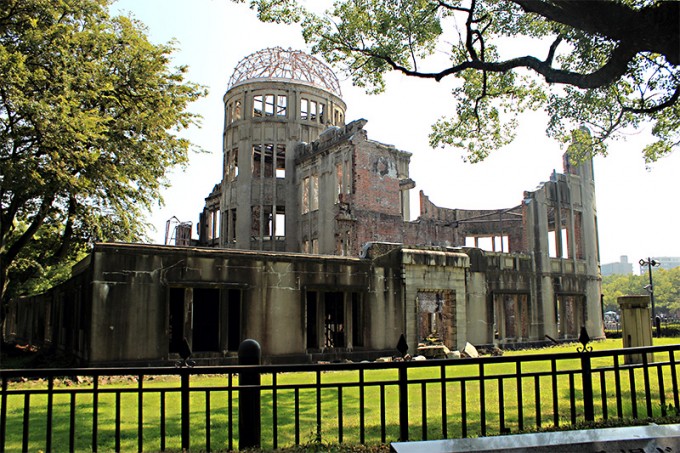 Remembering Hiroshima and Nagasaki. If you would like to unite with us and send a message to all world leaders calling on them to ensure that a nuclear bomb is never used again then be at the Canberra Rotary Peace Bell at 9.15am Sunday 5 August 2018. Hiroshima was bombed at 8.15 am on the 6th August while the bomb was dropped on Nagasaki on the 9th. For the first time the World Peace Bells in Christchurch, Cowra and Canberra will be rung at the exact time to remember these terrible events.

Join members of ICAN, A Chorus of Women, WILPF and Rotary Members to remember those lives lost in this terrible event.

The photo attached is of the A-bomb Dome—also known as the Genbaku Dome—is a brick building designed by Czech architect Jan Letzel that was completed in 1915 as the Hiroshima Prefectural Commercial Exhibition Hall. In 1945, the structure housed national and municipal government offices. As it was located just 160 metres from the epicenter of the blast, most of the building’s walls were destroyed in the bombing, but it was one of the few structures in the area to remain upright. In the postwar era it became a symbol of the atomic bombing; in 1996 it was inscribed as a UNESCO World Heritage site. Preservation work at three different times has helped to keep the building standing.