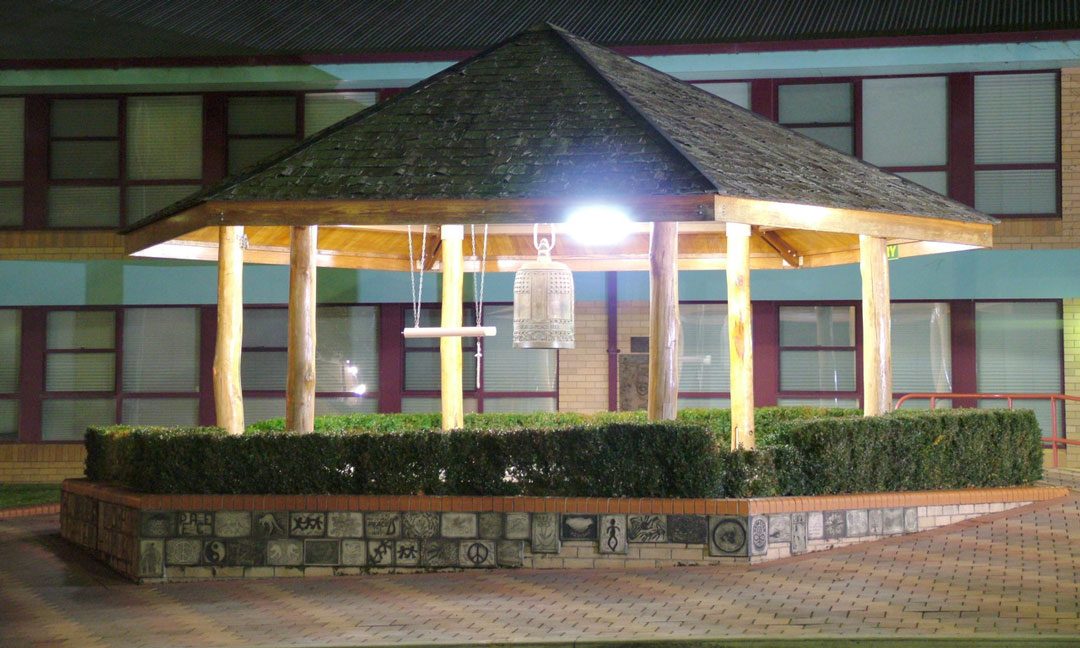 The Australian World Peace Bell was awarded to Cowra for its long-standing contribution to world peace and international understanding. Capital cities usually reserve the right to erect the World Peace Bell, however Cowra’s commitment to the World Peace Bell’s objectives has meant Cowra was awarded the honour.
Opening dedication.
Australia’s World Peace Bell was officially launched by the Governor of NSW, His Excellency Rear Admiral Peter Sinclair, on 15 September I 992;World Peace Day. On every World Peace Day, the third Tuesday in September, the Peace Bell at the United Nations and other Peace Bells around the world ring-out to mark the opening of each Disarmament Session. The Cowra Civic Square now proudly houses the Bell. The Pavillion is decorated with pottery tiles reflecting the community’s commitment to the World Peace Bell and its association with Cowra. The Association is a non-political, non-profit and non­sectarian organisation with any funds raised by theAustralian Chapter of the Association used for the promotion of the World Peace Bell. Membership of the organisation is open to all.
World Peace Bell Objectives.
The objectives of the World Peace Bell Association are to keep people informed of the horrors of war and to promote Peace throughout the world. The movement also aims to use the bell as a reminder of the continual need for people to rededicate themselves to working for peace. A total of I 06 countries have contributed coins to the World Peace Bell Association for the construction of peace bells; 24 countries have chosen a Peace Bell site with 42 Peace Bells already built.
Cowra is a town in the Central West region of New South Wales, Australia. It is the largest population centre and the council seat for the Cowra Shire, with a population of 9,730.
Cowra is located approximately 310 m (1,017 ft) above sea level on the banks of the Lachlan River in the Lachlan Valley. By road it is approximately 310 km (193 mi) South-West of the state capital Sydney and 189 km (117 mi) North of the nation’s capital Canberra. The town is situated at the intersection of three major state highways the Mid-Western Highway, Olympic Highway and the Lachlan Valley Way.
Cowra is included in the rainfall records and weather forecast region for the Central West Slopes and Plains division of the Bureau of Meteorology forecasts.
Skills